Appearing as a “little prince” right in the heart of magnificent Paris, where French fashion has revived strongly after the bleak world war period, Givenchy stands out for itself with its modern, elegant and feminine features. featured. The designs of the young Hubert de Givenchy are grace, appreciation and celebration of the graceful beauty of women.

Although the age is not too old like Louis Vuitton, what the Givenchy brand has contributed to the world fashion village makes many people impressed by Givenchy as an old name. With a classic and lavish style, Givenchy is like a mysterious world that anyone wants to explore and immerse. When French fashion is in the process of rising strongly after a long time of fierce and gloomy war, Givenchy appears as a shining star in the magnificent Paris capital, bringing freshness with fashion style. Modern, elegant and characteristically feminine. Now let’s learn about Givenchy’s history and fashion with Authentic Shoe

The day “Prince Givenchy” was born

Founder Hubert de Givenchy is a French-Italian born in 1927. At the age of 17, Givenchy left his hometown of Beauvais for Paris and attended the École des Beaux-Arts. In the post-World War II period, Givenchy worked for such prominent fashion houses as Jacques Fath (1945), Robert Piguet and Lucien Lelong (1946). In 1950, he became Elsa Schiaparelli’s first assistant and was appointed creative director. In 1952, when he had enough knowledge and experience in the field of fashion, Hubert de Givenchy officially opened his own fashion boutique in Plaine Monceau, Paris. He launched his first collection called Bettina Graziani. This is the name of a very famous model of the time and also the “muse” of the early Givenchy inspiration.

Givenchy’s fateful meeting with the famous actress Audrey Hepburn in 1953 made a magical turning point for both Givenchy and his brand. Since then, they have been both close friends and good collaborators. The image of Audrey Hepburn has always been the inspiration for Givenchy to create great works, the fashion style of female stars is also the most quintessential, best quality and represents the brand’s image. The first collection for the Givenchy Pret-à-Porter womenswear line was officially launched in 1954. In this period, Givenchy’s style was oriented not to be fussy but delicate, sexy and modern.

In 1957, the first perfume line of Givenchy was born, L’Interdit and Le De, inspired by the female star Audrey Hepburn and also dedicated to her. Two years later, Givenchy launched its first fragrance for men.

It was not until 1973 that the Givenchy brand officially entered the field of men’s fashion with the launch of the “Gentleman Givenchy” line with styles ranging from simple suits to blazers, suits, or tuxedoes. exhibition Givenchy has been owned by the LVMH group since 1988. In 1995, Hubert de Givenchy retired after 43 years of leadership, the Givenchy empire seemed to lose its direction due to the disruption of orbit, from John Galliano to Alexander McQueen .

When Riccardo Tisci was appointed to the position of Creative Director, he gradually rediscovered his identity and rekindled the “brand soul” – Haute Couture. Riccardo is a perfectionist for the only given designs in the world, not only limiting the number of designs and guests at the shows, he also explores the special materials and the complexity of the work. complex of cutting and sewing techniques to create the most perfect works. Completely different from the style of Christian Dior, Givenchy’s designs under Hubert de Givenchy pursue a feminine, feminine style and embody the beauty of the time. Givenchy has not only acquired loyal guests, but also forged lifelong friendships such as the wonderful association with Audrey Hepburn and the birth of the brand’s heritage pieces.

In the era of Riccardo, the Givenchy brand put on a completely different outfit full of mysterious colors. Givenchy’s girls hide their charm and charisma within their grit and indifference. Givenchy’s quintessence is inherited by Riccardo in silhouette, concept and structure. However, Givenchy under Riccardo was more prone to motifs and decoration, rebellious personality, forming a fashion style with a modern fairy and mythical character, with a strong aesthetic and spirit of Italian fashion. In 1954, Givenchy launched its first collection called Givenchy Pret-à-Porter. But it was not until 1973 that Givenchy really entered the field of menswear design with the launch of the “Gentleman Givenchy” line. 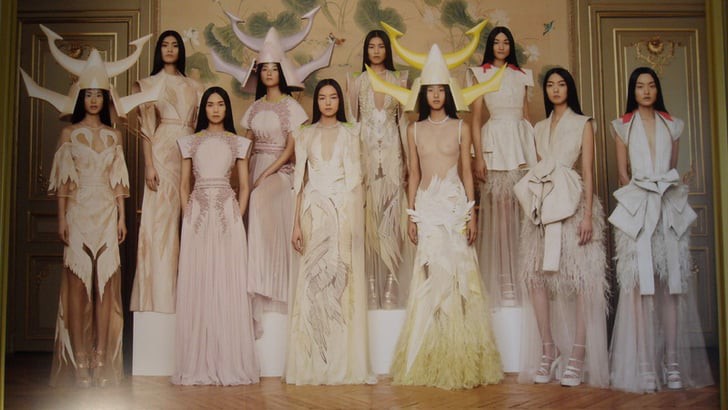 In 1981, Givenchy sold his fragrance line to Champagne house, Veuve Clicquot. However, now the Fragrance line has also returned to Givenchy by the acquisition of the LVMH group along with make-up and skincare products, under the Beauty Givenchy line.

Givenchy was nominated for an Oscar for best costume design. However, he did not want to limit himself to fashion design, after retiring he began to live at the chateau Chauteau du Jonchet to focus on the study of artworks and marble. Sculpture of the XVII-XVIII centuries. Meanwhile, Riccardo Tisci (creative director) is famous for having extensive relationships with many famous artists such as Kanye West, Jay Z, Rihanna, Beyoncé . In addition, Riccardo also collaborated with the famous sports shoe brand Nike to launch the Air Force 1 shoes in 2014. With Riccardo Tisci, Donatella Versace and Gianni Versace being two idols with great influence on the style. His design is bold with the fashion quintessence of Italy.

If you want to know more about the history of genuine brands and fashion, follow Authentic Shoe!