After the great success of his elder brother, the Air Jordan 3 in 1988, designer Tinker Hatfield had a headache trying to overcome that giant shadow. And the question at the time was whether the Air Jordan 4 would be as successful as its predecessor? And the answer is yes, as soon as the Air Jordan 4 was released in 1989, it established its status as the greatest and most important sports shoe in the world at that time. In this issue, readers should join Storepc to learn about the history of this legendary shoe line! The Air Jordan IV was released in 1989 and was produced in four colorways throughout the year. Essentially following the same colorways as the Air Jordan III, IV was released with two Bulls colorways based on white (White Cement and Fire Red), one based on black (Black/Red) and one based on black. version with white and blue accents (Military Blue). It retailed for $100, making it one of the most expensive basketball shoes on the market at the time. But that’s exactly what it’s worth, isn’t it? Keeping up with the success of the Air Jordan III is no easy task, but if anyone can do it, it’s Tinker Hatfield. And he did, quite successfully. The IV’s design really doesn’t go too far from the III, with the mid-cut height and the visible Air heel unit both returning. However, IV is more streamlined and slightly lighter than III. Its signature design details are the knit mesh on the side panels and tongue, as well as the unique lacing support system with the shoe’s iconic “wings”. The Air Jordan IV also introduces the “Flight” concept to the Air Jordan line. 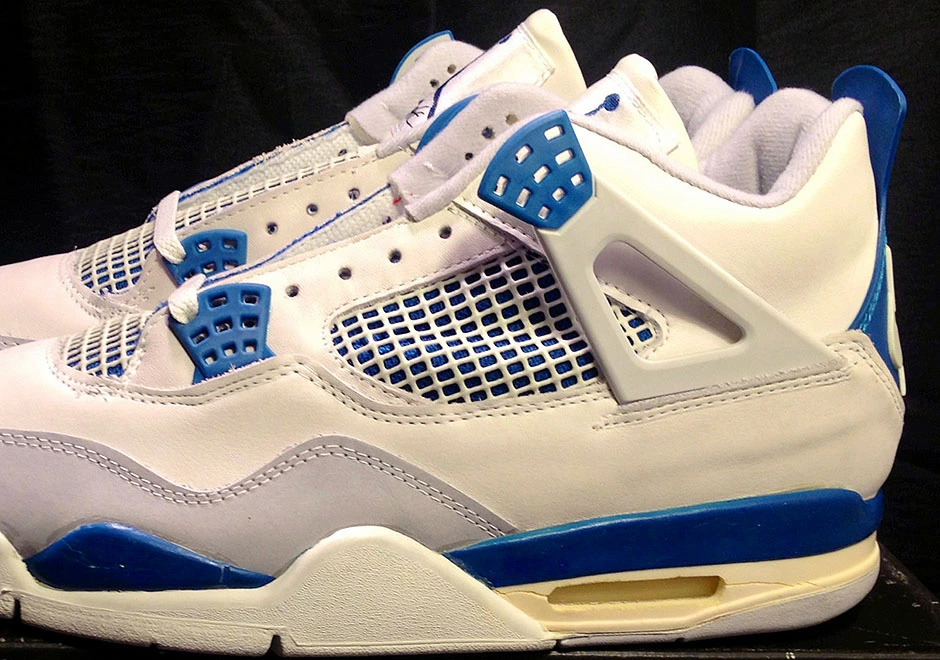 Technology
The Air Jordan IV may not introduce any groundbreaking new technology to the world of basketball shoes like other Air Jordans, but everything it does is functional and aesthetically pleasing. Already mentioned above, the IV brought a height between the top and visible Air, while other technological aspects of the shoe include additional Air in the forefoot, supportive “wings”, a The lanyard offers plenty of eyelets for custom lace placement, and a large heel pull tab for easy entry. The “Bred” colorway alone also introduces soft nubuck leather for the Air Jordans, a material that will be used on many later models. During the 1988-1989 season in which Michael wore the Air Jordan IV, he achieved his best overall statistical season by averaging 32.5 points, 8 rebounds, and 8 assists. There will still be two more seasons until MJ and the Bulls reach the Finals (they eventually won), but the 88-89 season saw the Bulls reach the Conference Finals for the first time ever. East of the Jordan era, firmly affirming that they are a worthy team to compete for the championship. The Air Jordan 4’s eternal moment of immortality is definitely ‘The Shot’. Walking on the Air Jordan 4 ‘Black Cement’ shoes, Michael Jordan inserted a dagger into the hearts of Cleveland fans on May 7, 1989, the Chicago Bulls eliminated the Cleveland Cavaliers in Game 5 of the series. NBA knockouts. With a 2-2 draw, both teams need to win to advance to the series of first-place matches. Overtaking Cleveland’s keeper Craig Ehlo, Jordan has made his name – and his shoes – in the history books. Jordan finished the game with 44 points in a shootout of 17 to 32. ‘Give the ball to Michael and everyone stay away! Chicago Bulls coach Doug Collins on the final game. See also: What you need to know about the Jordan 3 shoe line